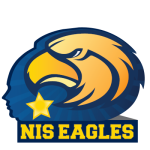 The NIS Eagles came home with the AIMZ Champions League for International Schools (Road to the States) Cup that took place in el-Gouna after eliminating ALSSON in the semi-final, and emerging victorious over AIS in the final game.

January 2022 marks the fourth consecutive win for the NIS Eagles!

Not only did the Eagles win the championship, but they were once again recognized as the most organized and disciplined team throughout the tournament.

- The NIS Eagles is a high school football team that was founded in January 2016.
- The team has participated in 9 summer and spring football tournaments organized by AIMZ Egypt which included most international schools of Egypt.

Out of their 9 participation's, the NIS Eagles won 6 gold medals and 3 bronze medals altogether, where they won the last tournament in January 2020 after beating AIS in the final match.